“Elbow”! “Knee”! “Kick”! These were the words Nat Wilson heard yelled from the line for the last time. For the past 13 years, Nat has helped women with physical and verbal techniques, along with playing the role of an assailant during Core, IMPACT for girls, workshops, and advanced
IMPACT programs. The goal is to leave women with the necessary tools to defend themselves during uncomfortable or dangerous situations.

Nat began his IMPACT journey in 2006. When a Chicago serial rapist was running rampant years earlier, his sister and friends asked how they could protect themselves and it left Nat lost, without a good answer.
A former colleague was an IMPACT board member and encouraged him to get involved. Nat contacted IMPACT and was invited to attend the final scenarios of an upcoming program to see if it was a good fit.

“I couldn’t believe it,'' Nat said. “These women...were more equipped to defend themselves than people who had been taking traditional martial arts for like four years.”

From that point forward, Nat made it through the nearly two year training and interview process - never looking back, even when he moved seven hours away.

About four years after becoming a suited instructor, Nat relocated to Northfield, MN for his full-time job. Despite the seven hour commute, Nat felt it was still worth traveling four to five times a year to train participants taking IMPACT programs.

“[Driving] It’s a bit of a drag. To me, it’s so worth it. If it were just a job, job I couldn't do it and it wouldn’t even matter if it was a lot of money. It’s the fact that the results of the work are so rewarding again, again, again, and again,” Nat said.

Over the years, Nat has seen so many powerful transformations. Women have shared countless personal stories that brought them to a seat on the mat in the IMPACT circle.

“We try to tap into something that’s maybe already there, inside, maybe they weren’t aware of. But also just give them the license to explore. Maybe looking at things a different way or trying things they’ve never done before.”

Through all the wonderful memories, Nat has decided it’s time to throw in the towel - realizing he’s getting older, the commute has become a lot, and family work schedules have become more intense.

Mixed with many emotions, Nat reflected on how he felt after his last class. “Now that it is over, I have a mix of melancholy that it is over but also pride in the quality of the work I was able to do with IMPACT,” Nat said.

Nat hopes that other men will get involved with IMPACT. There are several roles men can take advantage of behind the scenes, instead of being a suited instructor.

“There are a bunch of things that go on behind the scenes at IMPACT that are essential to keeping our classes running and keeping the organization strong. We need people to help plan class logistics, write grants, do PR work, web development, photography, solicit donations – these are just a few,” Nat said.

IMPACT Chicago thanks Nat Wilson for his many years of service.
There’s still time to sign-up for the Core Program held on December 6 - 8.

Everyone Has a Right to Feel Safe Within Their Own Body

The last IMPACT Chicago Core Program of this decade is December 6,7, & 8 at the Glenview Park Center, 2400 Chestnut Avenue, Glenview.  The course is open to women 16 years old and up (cis and trans).  According to Lead Instructor Katie (pictured to the left), “Everyone has a right to feel safe within their own body. I look forward to helping women and girls learn to use their physical and spiritual power to defend themselves successfully.”

Katie will be leading a team of instructors to teach and practice self-defense in realistic simulated scenarios with one instructor playing the role of an aggressor and Katie in the role of a personal coach.  The program allows participants to gain a maximum of self-defense skills in a short amount of time. Training progresses from distinguishing harmless and dangerous situations to verbal boundary setting to physical responses appropriate in an assault. Women learn and drill effective awareness, verbal, and physical techniques and then practice using their voices, managing their adrenaline, making moment-by-moment decisions, and, as a last resort, delivering strikes and kicks with full-force, just as they would need to do in a real-life assault.

AC: "You will surprise yourself."

Kandice: "To build your confidence!"

Lisa: "For me, it is wonderful to be in an empowering space where we learn tools, not rules. I'm tired of hearing how women need to be careful, to constrain our choices (e.g. are you sure you should be going to that alone?), and to walk through the world in fear."

I Got Out of My Own Way 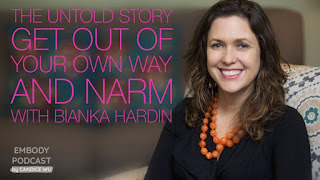 In my last blog post "Shedding Fear to Find My Unique Strong Voice," I addressed my fears and how self-defense training supported me in my healing journey and increased my sense of personal safety and confidence. And that now, instead of walking around with that old familiar feeling of fearfulness, I now feel more vibrant, alive, and confident.

This week, I am sharing a link to a podcast “The Untold Story, Get Out of Your Own Way and NARM” that I did with Chicago Center for Integration and Healing (CCIH). In the podcast, I address:
Bianka Hardin, PsyD
Licensed Clinical Psychologist
Centered Therapy Chicago 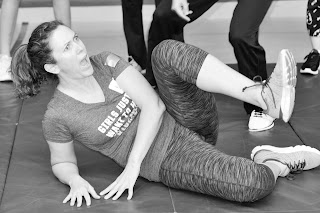 As a woman, I am very aware of the dangers that exist in society.  I have been taught about these dangers since I was young and continue to hear about the dangers to women on a daily basis on the news.  Every day there is a reminder that the world is not safe for women. Because I didn’t feel safe, I looked for ways that I wasn’t safe and for the dangers around me.  I used hypervigilance and caution to protect me for many years.

In the past few years, I began to integrate lessons from my work as a trauma therapist and wondered how they may help me in my own life.  The hypervigilance that was so familiar and protective to me did protect me but I also began to understand sustained hypervigilance negatively impacts my health and well-being. I began to recognize that the fear I was carrying was related to trauma that happened before I was born, it was intergenerational trauma, passed down from generations before me. In the blog post below and another one next week "I Got Out of My Own Way,"  I will share how self-defense training and somatic therapy supported me in my healing journey and increased my sense of personal safety and confidence  Instead of walking around with that old familiar feeling of fearfulness, I now feel more vibrant, alive, and confident.

It’s not safe to walk alone at night. Don’t trust strangers. ALWAYS be on your guard. You could be kidnapped.  As far back as I can remember, I was told that I am not safe and the world is a dangerous place.

Where did this fear come from? Why was I scared all the time?

Many of us are wired to be fearful because of our intergenerational trauma and societal imprinting. My mother and grandmother, of course, had good intentions and told me the same messages all women get because they cared for me and wanted me to be safe. Fear was transmitted as a result of their lived experiences and their own intergenerational trauma.

At the same time, we absorb daily lessons from movies, music, and television that women are weak and need to be protected. Every time we turn on the news, we are bombarded with numerous stories about women being assaulted and victimized.

My own personal wiring combined with the cumulative impact of society's consistent messaging resulted in me personally feeling weak, disempowered and afraid.  On the surface, you wouldn’t know how I felt.  But fear was lurking below the surface, interfering with my confidence and my voice.  Often, I looked calm on the outside, but inside, I was waiting for something bad to happen. If I didn’t know better, I could easily self-pathologize and call myself 'silly’ or 'paranoid.' As a professional now, in my many years of work with women and trauma survivors, I know I am not alone. Many of us live in fear.

Doing instead of fearing
I pride myself on being a doer, an achiever.  If there is a solution, I will find it.  Well, I found it. Two years ago, I learned about the IMPACT Chicago Core Program Self-Defense Training for Women and immediately wanted to be a part of this training.  I completed a two-weekend IMPACT Core Program where I learned verbal and physical boundary setting techniques. I was amazed at how empowering the experience was for me. I felt strong, powerful, brave!
Now I walk around with an attitude of “don’t mess with me, or else!” I also now know how to fight, how to defend myself, how to stand up for myself from the outset. Even better, I no longer need to buy into societal messaging that women are weak, or that I need to be nice because I am a female.  I know I have everything I need to defend myself.
The confidence and empowerment I experience after completing this program has been invaluable to me and has helped me personally and professionally. I wish every woman and every girl could experience this!