This is what I was put here to do

I joined IMPACT Chicago in 1990 or 1991 and am pretty certain that getting hit in the head a lot has nothing to do with not being able to remember which.  I attended a National Instructor Training in LA in the summer of 1992 and finished my certification as a suited instructor in the late fall of 1992.
In the past 22 years I have taught extensively in Chicago, and have done a lot of work in curriculum development as well.  I have traveled to San Francisco, Boston, DC, Indianapolis, St. Louis, and Jerusalem (and some other places as well) teaching IMPACT courses.  I am also very much in demand as a suited instructor trainer, and spends much of my mat time nowadays traveling to other chapters either training new instructors or doing follow up training for experienced instructors.
I have many years of martial arts training, competitive fighting experience, and many years of experience doing security work.

A martial arts student of mine that worked for IMPACT Chicago recruited me into IMPACT.  I already had some years’ experience as a professional self-defense instructor, but saw the value of the IMPACT Full Force self-defense approach and signed on immediately after seeing my first graduation. The moment I first saw IMPACT at work I knew that this is what I was put here to do. I’ve known it every moment that I’ve been on the mat since.

I live in Madison, Wisconsin where, in my day job, I work in management at the University of Wisconsin Division of Information Technology (my staff call me the nerd herder but I’d never call myself that). I am married to Kate Washabaugh, a veterinarian in Madison, and an IMPACT Chicago graduate.  We have two young children.

In my free time, I am an excellent cook and a mediocre guitar player, and play ice hockey every chance I can get.

Email ThisBlogThis!Share to TwitterShare to FacebookShare to Pinterest
Labels: Instructors

Violence & Self-Defense in the Media

Media tells us who "the bad guy" is. He's the sinister stranger lurking in the shadows. He's the person who looks out of place, who is somehow different from us. He's the guy whom you can just look at and know he's up to no good. At least that's what popular media would have us believe.

In reality, these images and ideas have less to do with crime and more to do with our cultural beliefs about race, class, and gender. In our modern society, we are constantly swimming in a river of misleading media messages about who is dangerous, how they plan to attack us, and finally how few options we have to protect ourselves. As a result of this constant stream of misinformation, conversations about safety and self-defense have frequently been used to reinforce stereotypes about violence and both racial and class biases.

The truth about violence is that it usually originates closer to home. It's most often perpetuated by people we know, who usually build up to horrible behaviors one small step at a time in predictable patterns of escalation. Not every terrible thing can be prevented, but much of it can. The first step will be to educate ourselves about who "the bad guy" really is. Then we can learn strategies for keeping ourselves and our loved ones safe.

We are pleased to announce that IMPACT has already begun taking that first step. IMPACT has a 25+ year history of working with young women, teaching them the skills of self-defense and emotional resilience. Now we've expanded our interpersonal safety programming to include more focus on rape culture, media literacy, and messaging. Collectively, across all chapters, we have been speaking out about these issues at the following conferences:

We know that in order to change the prevalence of intimidation, harassment, bullying, rape, domestic violence, and all the other horrors and tragedies that saturate our news outlets—that we must work together to change the conversations we have with our families, friends, and co-workers. As individuals shift language, perception, and behaviors, then the larger change will happen, too.

For thought provoking resources about shifting the dialogue:
Reframing the Conversation Around Domestic and Sexual Violence and Abuse by @EVB_NOW

Email ThisBlogThis!Share to TwitterShare to FacebookShare to Pinterest
Labels: education

Safety is Key to Reaching Your Fullest Potential 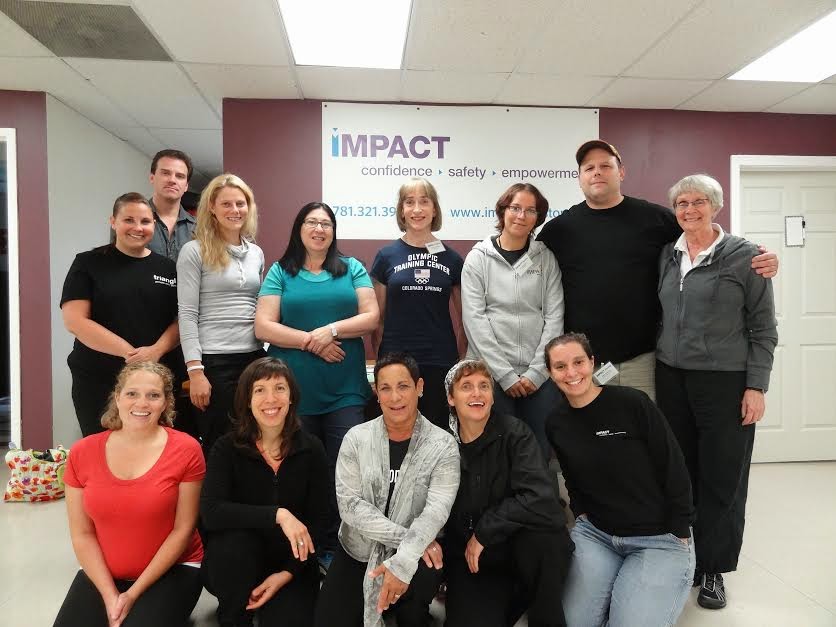 On the first day of the IMPACT International Directors Meeting in August 2014, IMPACT Boston offered a day-long training to IMPACT Directors and Representatives to experience first-hand IMPACT:Ability, a program that teaches people with disabilities, schools, and nonprofits to understand and prevent abuse. IMPACT Boston is part of Triangle, an organization committed to all people reaching their fullest potential. Triangle COO Tom Marshall said that the foundation of reaching one’s full potential is feeling safe and that IMPACT provides an avenue for people to develop an understanding of safety and tools to enhance one’s safety.

The training started with a demonstration of IMPACT:Ability, followed by a two-hour training and the opportunity for directors and representatives to practice their newly-learned skills with a mock class of Triangle participants. In the afternoon, IMPACT International directors and representatives worked with two different experienced instructor teams to teach two simultaneously offered two-hour workshops. IMPACT Chicago Instructor Martha Thompson participated in the training and is pictured here with the IMPACT Boston training teams and others attending the IMPACT International Directors Meeting.

A Female Thing: But How Does Race Come into It?

Lisa explores these issues through her knowledge of the history of African American women as well as interviews she conducted with women who had an intensive self-defense experience to explore these issues. She highlights the difference that can exist between the messages given to African American women in contrast to white women about beauty, expectations of strength and risk of sexual violence. As the interviewed women reflect on these issues it becomes clear that whether we think our bodies are too big or too small, whether we are expected to be quiet and polite or assertive and imperviously strong, self-defense training can help us all disrupt these expectations. Time and time again, this is what I hear from women as they complete IMPACT, emerging more firmly connected to our own true sources of strength and with high appreciation of what our bodies can do for us rather than how they look. Our paths in may be different in important ways, but women’s self-defense training is primarily, as one woman Lisa interviewed by Lisa said, a female thing. Lisa says for all women to experience this “female thing,” women’s self-defense instructors need to create space for women to explore ways in which gender and race affect their safety and their lives.

Email ThisBlogThis!Share to TwitterShare to FacebookShare to Pinterest
Labels: education

Check out the advice of self-defense scholars and See Jane Fight Back authors Martha McCaughey and Jill Cermele for students going tocollege!
No comments: