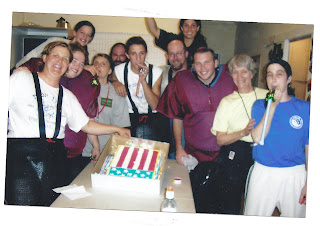 Even though I had not been to Israel before, I had known Jill and Yudit for years through the U.S. National Women’s Martial Arts Federation (NWMAF). I was confident that these two savvy NWMAF certified self-defense instructors would not be spending time and money to bring IMPACT instructors to Israel to teach self-defense and do instructor training unless they saw it as a unique addition to the other effective self-defense systems they were already offering at El Halev, a nonprofit Israeli organization established in 2003 with a focus on empowering women and girls through martial arts and self-defense (www.elhalev.org).

Though I believed that IMPACT would be a valuable addition to El Halev’s programming, I was concerned about how parts of this very American course were going to “translate.” Some of my concerns were echoed prior to our first self-defense class by some of the instructors-in-training who added other concerns that I hadn’t thought about--the circles where women share their experiences and feelings, women yelling together and offering their support to others, women fighting full force when someone in an obviously padded suit and helmet grabs them, and frankly—the drama and surrealism of it all!

I’m not sure exactly when my concerns were erased, but the instructors-in-training and the women in the first IMPACT course in Israel modeled what effective translation is all about. In its most common usage, the word translation means to take an idea formed in one language and express it in another, but in its broadest sense translation means to move, shift, or change—whether in language, perspective, location, or medium. That is what happened to this very American course in Israel. Instructors and students translated the essence of IMPACT—believing they are worth defending, judging behavior and not appearance or social status, being in the moment, 100% engagement, and following the ethic of least harm (i.e. doing only what you need to do to stop an attack and no more). What a thrill to have been part of the process of launching IMPACT Israel!