I Stopped a Thief 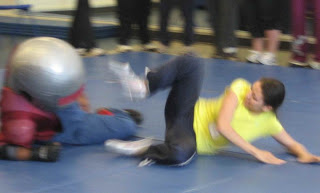 Joselyn Galvez, Northeastern Illinois University IMPACT Core Skills Grad
I used the Core skills today when a thief was about to steal my bike...and I want to share my story.

I work as an office assistant. I parked my bike on a pole that is almost in front of our window. I used a cable to secure my bike and wheel to the pole, assuming that nobody would try to steal it during
the daytime in a visible place in front of several business stores.

One of my friends always parks his bike on the same pole and nothing has ever happened. Then, I saw somebody messing around with my bike and I leaned back to check if it was my friend parking his bike next to mine. It wasn't!

It was another man moving fast untangling my cable. I ran out of the office yelling "What are you doing?"and "That's my bike!". My voice was loud and I was determined to prevent him from taking my bike. I put my hand on the seat of my bike and held it. I stood my ground and snatched the broken cable out of his hand. My female co-worker followed me. I kept yelling at him. He had a very confused look on his face. He didn't see us coming and wasn't expecting anybody to confront him. He was so fast that he didn't have the tool he used to cut my cable in his hand anymore.

He turned around calmly and walked a few steps, crossed the street and continued walking as if nothing had happened. My co-worker took my bike inside the office. I grabbed the office phone and called 911. I gave them a description of him. I asked the operator if she was going to call back and she said she didn't know.

I was shaky for a while. I can say that he was about 5 seconds away from stealing my bike. I'm proud of myself for being able to use the skills I learned in class. I didn't do anything to escalate the
situation, either.

There were other guys on the block and nobody helped. I was able to handle the situation effectively, even though I wasn't really thinking at that time. It was more based on my instincts.

They never called me back, so I'm assuming he got away with attempted robbery.

Thank you so much for providing this class. I never thought I could intimidate a professional thief. He was taller and heavier than me. I'm sure it wasn't the first bike he was trying to steal.

I will change my route often to get to work and keep my bike inside the office. The police told me to call 911 right away, if I ever happen to see him. My only concern is that he knows who I am and knows where I work and knows my bike. I will be more careful from now on.