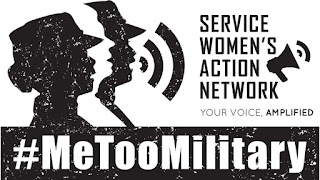 According to the The U.S. Department of Veterans Affairs (VA) women are now "the fastest growing group of U.S. Veterans." One in five women has reported what the VA defines as military sexual trauma (MST): sexual assault or harassment experienced during military service. The effects of MST are profound. The proposed Military Justice Improvement Act of 2017 is intended to address military sexual violence by removing prosecution authority over sexual assault from military commanders in the victim's chain of command.

At the beginning of this month, the Pentagon released a report on sexual assault in the military. Below is the response of the Service Women's Action Network (SWAN). SWAN is a national, nonpartisan organization and member-driven community network advocating for the individual and collective needs of service women.

To date, SWAN has played a major role in

FOR IMMEDIATE RELEASE May 2, 2019
SWAN Responds to Pentagon’s Report on Sexual Assault in the Military
Another jump in sexual assault reports for FY2018 indicates continued failure by military leaders
WASHINGTON, D.C.— Sexual assault reports in the military increased again in FY2018 according to the latest annual report released by the Pentagon today. According to the report 20,500 service members were sexually assaulted in FY18 with 6.2% of women and 0.7% of men experiencing an assault. For women this represents a dramatic increase from FY16 when the rate was 4.3% for women. Only 1 in 3 (6,053) reported her/his assault. The Marine Corps had the highest increase going from 7% in FY16 to 10.7% in FY18 and they remain the service with the overall highest prevalence rate. Defense department officials expressed frustration with the lack of progress in addressing this crime during a briefing to veteran serving organizations this morning.
Despite the 2% increase in reports, court martial convictions continued to decline going from 281 in FY17 to 203 in FY18. “An increase in reporting is only good if it leads to justice,” said retired Lieutenant Colonel Dawne Davis, Co-chair of the Board of Directors at the Service Women’s Action Network (SWAN), the leading national organization exclusively advocating for the rights of service women and women veterans. “It hasn’t. Despite the increase in reporting, prosecutions and convictions of sexual assaults have decreased over the last five years albeit for a variety of reasons – from lack of evidence to jurisdictional issues. The fact that the military encourages victims to report offenses is a positive step; however, the military must do more to alleviate the prevalent culture of sexual harassment and sexual assault. No option is out of bounds. We will not be satisfied until justice for service members experiencing sexual assault is served swiftly and equitably.”
There was a clear disparity between men and women in the level of trust in the system. Men report much higher levels of trust then women with over 80% of men trusting the system vs about 65% of women. Victims reported less than 50% satisfaction with the support they received from their chain of command, military investigators, and the DOD Safehelp Line. They had the highest level of trust in the Congressionally mandated special victim counsels and advocates that are now available to them.
“Not only are perpetrators not being held accountable, as evidenced by the low prosecution and conviction rates,” said SWAN CEO retired Army Colonel Ellen Haring, “but service members who report can expect to experience retaliation.” In FY2018 43% of victims reported being retaliated against after coming forward. “Every sexual assault represents a service member who has committed fratricide. It should be called an insider threat and it should be a treated as an insider threat. If it were treated as an insider threat far greater action would be taken to root out this cancer,” said Haring. “So far, the military has taken a piecemeal approach to attacking what is a very serious systemic problem that is rooted in the culture of the military. Until military leaders are willing to take a hard look in the mirror and make the systemic changes that are required this threat will persist.”
By service branch, the Marine Corps saw the highest prevalence rate at 10.7% followed by the Navy at 7.5%, the Coast Guard at 6.2%, the Army at 5.8% with the Air Force having a 4.3% rate of sexual assault. All military branches experienced an increase in prevalence over FY16.
“The military must not rely on an increase in reporting as a sign of progress,” said retired Navy Capt. Lory Manning, Director of Government Relations at SWAN. “The number of reports could be due to more confidence that justice will be done, however it could also mean that more assaults are occurring—or both. The increase in reporting should not be spun as good news while sexual assaults continue to rise,” Manning said.

About the Service Women’s Action Network

SWAN is a national, nonpartisan organization and member-driven community network advocating for the individual and collective needs of service women. To date, SWAN has played a major role in opening all military jobs to service women, holding sex offenders accountable in the military justice system, eliminating barriers to disability claims for those who have experienced military sexual trauma, and expanding access to a broad range of reproductive healthcare services for military women.
Media Contact: Ellen Haring, SWAN, O: (202) 798-5570, C: (571-331-0416, ellen@servicewomen.org