The IMPACT Core Program was highly recommended to me by 4 former participants of the program, when I moved from rural Iowa to attend graduate school in Chicago. Loyola University School of Social Work added its voice of encouragement to take an IMPACT class at our school orientation. I recognized the need to take this program, but I did not take it until after I graduated and began working at St. Leonard’s Ministries in Chicago. My work as the Director of Education for the High School Program requires me to work evenings. Due to the location and late hours, I knew I needed to take an IMPACT course. The opportunity came when 2 graduates from IMPACT offered to pay for me to take the course.

I have always had a degree of trust, but I am not streetwise. After my move to Chicago, I began to recognize a level of fear and caution within myself whenever I rode the L, walked the streets in the evenings or when alone in my home. As an older adult, I have some physical limitations and I knew I did not have the ability to escape or run away from a pursuer. Now that I have taken the Core Program, I can walk the streets, ride the L or be alone in my apartment without fear. I know I have the skills and training to protect and defend myself. Fortunately, I have not had to use my self-defense training against an assailant.

I believe the biggest element that is imprinted in me from the Core Program was finding and using my voice. I am grateful for the intense, physically and emotionally demanding program of IMPACT and I will carry with me this powerful, transformative experience.

Email ThisBlogThis!Share to TwitterShare to FacebookShare to Pinterest
Labels: After IMPACT, Before IMPACT, benefits of self-defense

Kids Will Grow Up Safer, if Enough Potential Predators Get Their @$$%$ Kicked

At his last checkup, around his third birthday, my son Sam's most excellent pediatrician asked for his permission to touch his penis before examining it. Since then, Kate and I periodically will discuss with him who gets to touch him there (he does, mommy and daddy do and the doctor does, with Sam’s permission), and what to do if someone else touches him there, or tries to or asks to. Did I mention? He's THREE!

This is our world.

I'm about to begin my 21st year working for IMPACT Chicago, where I work with some of the most amazing people there are, to teach full-contact women's self-defense and rape prevention classes. This relates to what Kate and I are teaching our son because we live in world where predatory sexual violence happens. It happens, I'm convinced, in large part because the predators believe it is a low-risk crime to commit (that's not the only reason, of course, but it's a big one).

For years, IMPACT has been graduating classes of 9 to 16 women who have learned to ramp up predators’ risk level astronomically. If we do enough of that, maybe my son and daughter won't have to worry so much about teaching my grandchildren about who gets to touch them when they're three years old.

I've been doing this a long time. I've never met a woman who couldn't learn to defend herself. Please, look at the website, consider signing up or encouraging women you know to sign up. If enough potential predators get their asses kicked enough times, all our kids will grow up safer for it.

It Should Be Dangerous to Attack a Woman 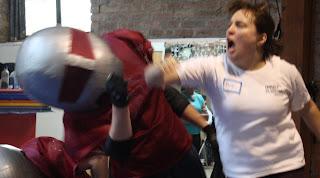 I grew up in northern California, just a hop, skip and a jump from the Bay Area. I grew up with liberal parents who encouraged me to do anything, because I could and should! The world was my oyster! I never considered myself to be anything but strong and empowered. Then I flew the coop, jumped ship, made a break for it…in other words: COLLEGE. This is when I learned that not everyone is raised to believe women are equal, that we are strong and entitled to everything that men are. I chalked it up to new experiences, but this new world view really seeped into me insidiously. I started to forget that being strong and sure of one’s opinions was acceptable and should be encouraged.


Fast forward 10 years through two master’s degrees from California and Upstate New York to this west coast girl settling into a cautious Midwestern existence in Chicago. I had connections to a few friends, one of whom was dating a guy who helped teach self-defense. I filed self-defense away as something that would be good to learn, but not necessarily needed. Then, I was followed home. It wasn’t a huge deal at the time…but I was frightened.


The next day I signed up for that self-defense class and…I woke up. In one weekend, I was reminded of that sassy and spirited gal who left California so long ago, and I was deeply saddened. If I was subconsciously being pushed down by the seemingly latent messages of female inferiority….what about the women who were experiencing it openly? Why was it still happening? What could I do? Well, I learned that what I can do is fight.


So five years later, I’ve become an instructor. It took two years of training and work, but in light of the statistics it didn’t feel like there was any other option for me. IMPACT Chicago teaches full-force, fully adrenalized self-defense for women and girls. We use padded male instructors so women can learn what it feels like to hit something and that they do have the strength and power to do it. We also provide an opportunity to learn and practice prevention, assessment, and verbal boundary setting because we emphasize that no one should engage in physical altercations if they can avoid it. But knowing your body can back it up if you’re in danger adds so much weight to the message. We teach women they are worth taking care of.


Consider how revolutionary it will be when it becomes a very dangerous thing to attack a woman. Consider how different the world will look, because right now, there are no consequences and the mentality that “she was asking for it” still exists and is tacitly approved by society. Even now. So we start with 15 women at a time and we teach their muscles how to remember what to do when that adrenaline rush hits and their fine motor skills go out the window, and if they feel empowered along the way to change the world a little bit themselves, then we’ve done our job.

Email ThisBlogThis!Share to TwitterShare to FacebookShare to Pinterest
Labels: After IMPACT, Bio, IMPACT instructor, Why IMPACT

Your Connections Count : IMPACT as Part of Your Social Network


“Social networks are these intricate things of beauty, and they’re so elaborate and so complex and so ubiquitous that one has to ask what purpose they serve,” declares Nicholas Christakis in his TED talk from 2010. According to Christakis, our networks serve us in many ways from affecting our body size to our level of happiness. Perhaps someone in your social network introduced you to IMPACT after they had graduated from the Core. Maybe you then invited your mother, or sister, or friend to experience it as well.


We are often reminded that personal connections are the most common reasons individuals first engage with IMPACT Chicago. (It’s true - please, keep telling your friends!) But now, we are seeing even more clearly how your personal and professional relationships can influence the organization as it moves forward and seeks to empower even more women and girls.

The message is simple - your connections count! Certainly they are important to you, but they are also important to IMPACT in ways you may have never realized. IMPACT graduate connections have helped us find places to host programs, have invited us to teach self-defense workshops, and have assisted us in printing posters and fliers.

We need the power of your social networks to continue our work! Will you help spread the word about IMPACT to your connections? Everyone has something to contribute! Consider these questions:

Please consider sharing the work of IMPACT within your realms of influence. If you like, we can even coach you so that the conversations you have with your contacts can be most effective! If you are open to linking IMPACT with one of your connections, please email Katie Kramer for more information. As Christakis noted “Social networks are these intricate things of beauty…” Let’s join our networks and make something even more beautiful.

Katie Kramer, IMPACT Chicago Grad and Board Member
No comments: