Addressing Mis-Perceptions About Self-Defense and Feminism: Reflections on the 2013 NOW Conference 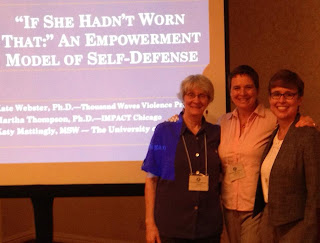 It may surprise you to learn that many feminists don’t see self-defense as a feminist issue. Programs that focus on transmitting prevention skills to individual women tend to be dismissed as potentially “victim blaming” and rejected for foundation grants. Read on to hear how three self-defense instructors presented a panel at the annual NOW (National Organization for Women) conference to address these misunderstandings of our work and help feminist anti-violence advocates view self-defense providers as allies in the struggle to end violence against women.

“If we want to stop violence against women, we have to focus on men and stop asking women to do the work.” This was a common refrain voiced in the Violence Against Women Track of the 2013 National NOW Convention held in Chicago in July.  This mantra echoes a sentiment in the anti-violence field that presumes self-defense training places responsibility on women by supplying a list of don’ts—don’t wear that, don’t go there, don’t drink that—and ignores the responsibility of perpetrators. This sentiment was repeated enough times in the sessions preceding the panel “’If She Hadn’t Worn That:’ An Empowerment Model of Self-Defense” offered by NWMAF certified self-defense instructors Thousand Waves Violence Prevention Director Kate Webster, University of Michigan self-defense instructor Katy Mattingly, and me that we met over lunch to make adjustments to our presentations to address this issue head-on in our introductory remarks.

Kate, Katy, and I all agreed that for panel attendees to hear what we had to say about an empowerment model of self-defense that we had to challenge an “either/or” paradigm and offer “both/and,” stating the importance of providing people with tools to keep themselves safe while simultaneously working to change cultures and social structures that perpetuate violence. Addressing the need for both individual tools and social change and the complexities of responsibility and blame was well-received and resulted in our being able to share the roots of an empowerment model of self-defense in the feminist movement (Kate), the key elements of an empowerment approach to self-defense (Martha), and the powerful outcomes in preventing sexual assault and increasing women’s self-efficacy (Katy).

Addressing the complexities and then inviting participation from attendees resulted in people raising questions and making comments about their own struggles with how to frame violence and the role of self-defense.  For instance, one attendee said: “I know that blaming the victim is wrong, but I don’t know what to put in its place.” On the surface, the easy answer is the catchphrase about focusing on men’s responsibility. It is a comment, however, deserving serious consideration and discussion. Deming, Covan, Swan, and Billings (2013) have found that even with all the rape prevention work on college campuses, myths continue to shape college students’ reactions to rape, resulting in excusing men and blaming women.  So even among a population that has received the latest information about rape myths and facts, rape victims continue to be blamed if others perceive ambiguity or complexity (e.g. a woman was drinking alcohol).

Further, internationally-known and highly influential self-defense instructor Nadia Telsey (2007) urges us to distinguish regret and blame. She believes that by creating space for people to express regret for their behavior (e.g. being drunk, not listening to their instincts that someone meant them harm), we acknowledge individual agency which gives people hope and choices. The distinction between regret and blame is often blurred so we need to create space to allow people to work through the difference.

Participants responded positively to the messages we conveyed about an empowerment approach and the exercises they participated in as a way to experience our key points. An empowerment approach to violence offered a new framework for many and a way to begin to grapple with understanding the complexities of violence and self-defense. Our task, however, remains large: how to both continue to prepare individuals to keep themselves safe and simultaneously working to change cultures and social structures that perpetuate violence and blame victims.
Martha Thompson, IMPACT Chicago instructor


As verbose as I am, I am challenged to summon up adequate words to express my gratitude for the IMPACT Core program. It was a life changing experience for me; helping me to heal a past experience more than 8 years of talk therapy did. I truly know now that the "only way out is through". And that no matter how much I talked about what happened to me in the past, nothing helped more than re-experiencing it in my body with a different outcome.

I was so scared to take the class that I put it off for years. Through the patient and supportive communication with Leslie, I signed up and then still waivered back and forth. Her loving boundary of telling me that there were other women waiting to take the class helped me commit.
I had thought that I was mostly scared because I am in the worst physical shape of my life having gained over 50 lbs since the 2006 rape to try to "protect" myself from others. With the expert pacing of the teaching and gradual learning of the skills, my body experienced that it can do way more than I thought it could. I learned that I don’t have to be "in shape" to use my greatest gifts of my hips and legs. In fact, my weight added power and strength. I now am so grateful for my hips and legs.

Adrenaline became my friend as Margaret so exquisitely taught us to "use" the feelings of fear as fuel. This was perhaps one of the greatest lessons. I had thought previously that fear would cripple me into paralysis because that is what I had thought it did back in 2006. But I learned, through my body, that fear is a gift and that I can use it to make a choice. It was Mark, one of the male instructors, who so sensitively explained to me that fear did not cripple me in 2006. He explained that because I felt fear and made a choice not to fight; not because I couldn't do it but because a part of me knew that I was in so much danger that the choice was not to fight. I realize now that my fear about taking the class was because I had internalized the false belief that I was a "failure" because I didn't fight my rapist. Mark and the whole team taught me that I am a survivor because I lived through it. I am alive because of my fear. My fear was a gift that told me what to do to protect myself from getting killed.

Today, I feel confident that I would make many different choices should that same or a different threatening situation arise. This class was about so much very more than just the physical skills. The verbal boundary setting skills and practice are priceless. Learning to know when to say no is something that every woman needs to learn. We can talk and analyze about it ‘til the cows come home but there is nothing like the gift of actually getting to practice it in a safe setting. Margaret's coaching in my ear became paramount to me. I needed to learn how to breathe, assess and know what I want and don't want.

Back to the future: Former IMPACT Instructor Cheers on his Daughter at her Graduation


Former suited instructor Marcus Martin returned to IMPACT on June 30, 2013 to cheer on his daughter, Arielle, as she completed the Core program! Marcus was an IMPACT instructor in the 1990s. His faith in IMPACT’s training has remained strong and he was thrilled to once again see the fighting spirit of the women on the mat. In the 1990s, Marcus said about IMPACT:

“When I think about the importance of training women and children to be safe in a potentially unsafe world, I’m reminded of the story of David … [he] utilized the resources he had available (confidence, support, and inner strength) to deliver a knock out blow to Goliath.”

After Arielle completed the Core Program, Marcus said: “It’s great to see and know that IMPACT is still empowering, training, and making a difference in the lives of our mothers, sisters, daughters, aunts, friends, neighbors - WOMEN! I'm thankful and happy that IMPACT is still in operation and available for someone important in my life - my daughter!”

Arielle says: “I feel empowered. I found my own strength as a woman and I’ve learned how to fight like a woman. I am now more confident.”

Teen Girls Say “NO!” To Violence

A group of teen girls from a local tumbling team, applied the skills they learned on the gymnastics mat- agility, strength and determination- to a whole new scenario: self-defense.


After a tragic loss of a close friend, the potential of experiencing violence, directly or indirectly, became a reality for these young women. Guided by a personal coach from IMPACT Chicago, these teens took to the mats and learned to assess dangerous situations, set boundaries, and as a last resort- physically defend themselves.

“IMPACT has made me a stronger person, has built up my confidence and taught me to never underestimate myself. Learning these skills has made me more of a woman than I ever was before.” recalls Bri, a middle school student who recently completed IMPACT for Girls.


“IMPACT is a great experience to have and it teaches you that you're as strong as you feel you are against anyone, big or small. I really liked it and think you should give it a try!!!” Si, a middle school student, exclaims after completing IMPACT for Girls.