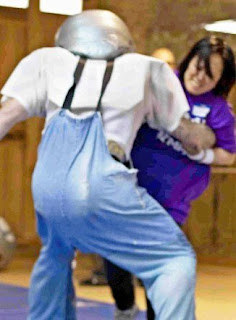 From AC Racette, IMPACT Chicago Assistant Director: Last month, we caught up with Leslie Eto in our blog. Leslie took her first IMPACT Core Program in 1990. She talked about how IMPACT helped her set boundaries at work, and how she’s seen women with disabilities succeed in the Core Program with the support they receive. You might have spoken to her already, as she is the understanding person on the phone who takes your registration or coordinates your IMPACT workshop. She is part of a group of women that has stayed very involved in IMPACT ever since taking a Core Program. AC Racette, IMPACT Chicago Assistant Director, interviewed Leslie in June 2012.

Q: Why do you work for IMPACT with your already busy schedule?

It’s fun, it’s a workout. I reconnect with classmates and instructors. They’re the best group of people I’ve ever met. Two years after I took the class, there was an opening for Registration Coordinator. Twenty years later, I’m still the Registration and Workshop Director. I answer the hotline and e-mail, register people and set up workshops and I also now teach workshops. Organizations ask whether we’ll come on site and teach self-defense to their clients, their staff or to children in a school environment. They’ve seen a video from a website and they want a “mugger”, but the "mugger" is not available for these shorter workshops. I tell them that a workshop is an introduction to give them an idea of what can be learned in the full IMPACT
Core Program.

Q: Tell me about how you have lived with IMPACT and how IMPACT has stayed with you since your class in 1990, 22 years ago.

On the trading floor, I became very clear about boundaries. I didn’t go there to be belittled or abused so when it happened, I called it out. I put a stop to that very early. That was a big change for me. I work in an office now, which is a very different environment than the trading floor. I bring my flyers and pass them out to women I work with. Other things might be preventing prospective students from taking the step to sign up. When people leave a message with lots of questions, they want to talk and have someone listen. So I listen. Because I don’t know them yet, it’s easier to talk about anything that comes up. Graduates and supporters don’t want to be pushy when enrolling their friends in the class. They know what they were up against when they went through it and they don’t want to open that can of worms. I get permission to open that can of
worms. It’s not as easy as “Hi, I’m calling to register”. It can be a long emotional process to sign up for IMPACT classes.

That’s mainly what I do. They want to talk about their martial arts or fitness background. I know from first-hand experience that there’s nothing like IMPACT. You really get to learn what it feels like to hit  somebody 100% and get feedback. The male instructor tells you “Oh you’re hitting me with 20 lbs, 60 lbs of force.” The prospective students want to know “Who are these guys and why are they doing this? Do they get a kick out of it?” The male instructors are supportive and kind, and all they want to do is end violence against women. They’re willing to put on 40 lbs of protective armor and sweat and fall down and get kicked and get all this pent-up emotion directed at them. Women are very powerful using all this emotion because we’re fighting for our lives. They’re really doing us a service and you can’t find it anywhere...you can’t find it in martial arts. Aikido classmates came to my graduation and watched the extended fights. Afterward, they said to my male instructor, “Come on, she knocked you out way before the end of that fight!” He said “Yes, she did, but we over-train”.

I tell women interested in registering for a class about my old fears walking down the street, things that happened and how I used to shy away. I don’t shy away anymore--that’s IMPACT training. I talk to mothers who want to protect their kids and toddlers. You have to learn to defend yourself if you want to be able to defend your child. You learn to be a role model. During the 20th Anniversary celebration, women could choose fights from different set-ups. A Raggedy-Ann doll stood in as somebody’s kid. A woman ordered it “Stay over there!” and she kicked the hell out of the mugger and went to get the doll and walked off. It was funny because it was a doll, but it was also touching... meaningful to her and to everyone.

When women finally sign up, I congratulate them and tell them they’re brave. It’s a brave thing to do. There are many reasons not to do it. I know where they are--I, too, was really anxious and I was looking for reasons to get out of doing it. It’s scary. Once you’ve found the courage to commit to the class, you’re half-way there. Everything occurs before it occurs.

If you would like to join a great group of men and women in volunteering for IMPACT, we can use your skills and talents! We need copywriters, media experts, people to help put up posters in stores and drop off flyers which we do in teams, people experienced in fundraising, and people to get the word out in general. Contact the volunteer coordinator at volunteers@impactchicago.org and welcome to our team.

If you are a graduate of the Core Program, put the date for the 25th Anniversary Celebration in
October on your calendar! Check out our website at http://www.impactchicago.org/

Email ThisBlogThis!Share to TwitterShare to FacebookShare to Pinterest
Labels: staff