Women and Girls Have the Right to Be Safe: Clara Orban, IMPACT Chicago Board Chair 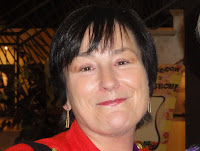 Clara Orban, Ph.D., has been a member of IMPACT Chicago’s Board of Directors since 2004, and currently serves as Board Chair. She also chairs the Executive Committee and the Task Force on Executive Director Transition.
Clara initially came to IMPACT Chicago as a student in 1992, spurred by the need to feel safer as she walked through life. Empowered by her IMPACT training, she immediately became a strong supporter of the organization, working to help other women achieve a sense of protection by building their self-defense skills. IMPACT, she says, shows women and girls that “they have the right to be safe; no one can take that away from them.”
In her life outside IMPACT, Clara is a Professor of French and Italian, and she chairs the Modern Language Department at DePaul University. She has served on the Board of Directors of the Illinois Council on the Teaching of Foreign Languages. Clara enjoys knitting and sewing, two skills which she learned from her mother and which bring back fond memories of their years together. “I think every member of my family now has a scarf I’ve done for them,” she says. Also an inveterate traveler, she has visited all seven continents, but has no intention of slowing down: “There’s still much more out there I’d love to see.”
Clara and her husband of twenty-five years share their home with two “great, time-consuming, but loving” dogs. Her husband has been supportive of IMPACT for as long as she has – “A real partnership!” – and together they work toward a future free of violence against women. “It won’t happen in my lifetime,” she says, “[But] the world will be a wonderful place when women no longer need to defend themselves.”
Bio of Clara by Amy Voege, IMPACT grad and board member

Email ThisBlogThis!Share to TwitterShare to FacebookShare to Pinterest
Labels: Bio, Board